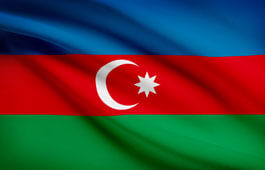 We were treated to a rollercoaster of a race in Azerbaijan, with five different drivers leading the Grand Prix at various stages, tiny margins separating the leading teams, plus two safety car periods and a red flag. This race had more twists and turns than the beautiful Baku City Circuit around which it was run!

Qualifying was just as dramatic in a session which saw five crashes and four red flags. In the end, Charles Leclerc took advantage of a tow from Lewis Hamilton, with his Ferrari showing excellent pace, to clinch a surprise pole position. That’s two poles on the bounce for the Monegasque, who could soon be awarded the title of ‘Mr Saturday’.

Come race day and Leclerc did well to hold off Hamilton at the start, but the straight-line speed of the Mercedes soon proved too much, with Hamilton cruising past the Ferrari without the need for DRS on lap 2. Max Verstappen copied the move on lap 7 and we were then treated to an enthralling contest with milliseconds separating the Mercedes and Red Bull.

Lewis Hamilton broke the deadlock when he pitted on lap 12, however, it was an uncharacteristically slow (4.6 seconds) stop for the Silver Arrows. Verstappen pitted a lap later and came out comfortably in first place. His teammate, Sergio Perez stopped next and now it was Red Bull’s turn to fluff their lines with a slow (4.3 seconds) stop. Crucially, it didn’t matter as Checo re-joined the race just ahead of Hamilton, which must have felt like a hammer blow to Mercedes.

Red Bull had the upper hand and victory looked on the cards until the left rear tyre of Lance Stroll’s Aston Martin burst on lap 33, apparently out of nowhere, as he came down the pit straight. Stroll’s car suffered a forceful smash into the barriers. Thankfully, he walked away unscathed but that will have left him shaken. A safety car period followed.

Verstappen aced the restart on lap 35, and given the dominance of his performance so far, nobody thought he would finish anywhere other than in first place. Then… disaster… the left rear tyre of the Red Bull failed on the pit straight, in a similar position to Stroll’s crash, and sent Max spinning into the barriers on lap 47. This was another heavy shunt, prompting a safety car and then subsequently a red flag. Luckily, the Dutchman was unhurt. But he was clearly furious and kicked the tyre of his stricken car. In the circumstances, Verstappen’s reaction is understandable. At the time he held a 4 second lead over Sergio Perez and would certainly have won from that position. Instead, a DNF meant no points added to his tally in the Drivers’ Championship.

Confusion followed as to exactly what would happen next but perhaps most telling was Red Bull’s Jonathan Wheatley sending a radio message to race director Michael Masi about the incident: “Michael I know you’re busy… We got zero warning of that failure, nothing on a metric, not a vibration. Our point is: Consider red flag and the opportunity for everyone to change tyres.” In the end, that is exactly what happened.

Two almost identical crashes looks bad for Pirelli, who said afterwards that debris was the likely cause of the Lance Stroll and Max Verstappen’s crashes. Investigations into this will go on long and hard and we will reserve judgement. The only thing to say is that it was a dissatisfying end to what had been an excellent race.

The 35-minute delay was worth the wait though and racing resumed from standing start on lap 50. So it transpired that it would all boil down to a frenetic 2 lap sprint for the line. Perez now held P1, with the smoking Mercedes of Lewis Hamilton P2. As the lights went out Hamilton seemed to get the better start and his car edged ahead of the Red Bull, but in an uncharacteristic error he locked-up and went straight on into the runoff at turn 1. With no time to recover, that was that and Lewis too was out of the points.

Come the chequered flag and we were treated to the surprise podium of Perez (P1), Vettel (P2) and Gasly (P3). All three drivers should be commended for a fantastic effort. Whilst it was a bittersweet victory for Red Bull, the sheer delight on the faces of the Aston Martin and Alpha Tauri teams was a joy to behold.

Baku has a reputation for throwing up exciting, unpredictable races and this was one of the best. Red Bull may consider themselves unlucky not to have achieved their first 1-2 finish since 2016 but they now hold a valuable 26-point lead over Mercedes in the Constructors.

It looks as if the title race could go down to the wire and if you would like to join us at the F1 Paddock Club for a Grand Prix later in the season, please contact us on +44 207 107 1640 or email: f1@edgeglobalevents.com.